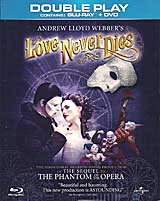 Blu-Ray + DVD - The Sequel to THE PHANTOM OF THE OPERA

Set 10 years later, the Phantom has escaped from Paris to New York where he lives amongst the joyrides and freak shows of Coney Island. He has finally found a place for his music to soar, all that is missing is his love Christine Daae.

In a bid to win back her love, the Phantom lures Christine, her husband Raoul, and their young son Gustave from Manhattan, to the glittering and glorious world of Coney Island... they have no idea what lies in store for them.

This is the spectacular new Australian production, filmed at Melbourne's iconic Regent Theatre.