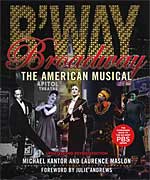 
Companion to the PBS Series - foreword by Julie Andrews

A companion to the six-part PBS/BBC4 documentary series, Broadway: The American Musical is the first comprehensive history of the musical, from its roots at the turn of the 20th century through the smashing successes of the new millennium.

The in-depth text is lavishly illustrated with a treasure trove of photographs, sheet-music covers, posters, scenic renderings, production stills, rehearsal shots and caricatures, many previously unpublished. Complementing the narrative are sidebars that highlight the stars, the shows, and the songs - the key ingredients that make the musical great. Each chapter also includes essays written by some of Broadway's most fascinating luminaries, past and present.

This edition has been revised and updated, with a brand-new foreword by Julie Andrews and new material on all the Broadway musicals through the 2009-2010 season.

Though this nostalgia-laden tome is designed as a companion book to a forthcoming PBS series, it stands on its own as a particularly striking and comprehensive take on a uniquely American art form. The copious illustrations alone are worth “the price of admission,” and the meticulously researched text spans the years in six information-packed chapters. With its beguiling blend of entertainment and history, this splendid work is a must-have, whether you're a musical-comedy devotee (i.e., you know that Barbara Cook's Broadway debut was in 1951's Flahooley) or a neophyte (you're not sure who Barbara Cook is). Publishers Weekly

This gorgeous behemoth is the ultimate coffee-table book for lovers of the American musical, though it is smarter and better written than such a glib description suggests. Broadway is a great read in its own right, consisting of Maslon's well-researched, well-written history, which draws on material from Kantor's film, supplemented by 110 years' worth of excerpts from scripts, capsule biographies of noteworthy theater people, and contemporary interviews with great stars. Just in case you can't read, hundreds and hundreds of drop-dead beautiful photographs, many of them rare and rarely reproduced, make this a great grazing-and-gazing experience, too. Booklist

Plenty of books have been written on Broadway history and productions before: so what makes Michael Kantor and Laurence Maslon's Broadway: The American Musical stand out? Perhaps it's the in-depth color illustration packed into every page of this coverage of Broadway's musical heritage and history, or it's in-depth analysis of Broadway's influence as a cultural force through the decades. Or maybe it's in-depth narratives and handy sidebars highlighting the major stars. All these factors earn an important role as the companion volume to the six-part PBS series of the same name. All of these set Broadway: The American Musical high above competitors. Midwest Book Reviews

This masterly compilation would be an exciting adventure for the musical lover even without the televised series. Highly recommended for all theater collections. Library Journal

Not a slavish recreation of the series, but its own animal-and an awe-inspiring animal at that-a delicious treat for anyone interested in the history of this cherished American artform. Back Stage West

A wonderful, stand-alone, history of the Great White Way and essential for any lover of the American musical theatre. Town and Country